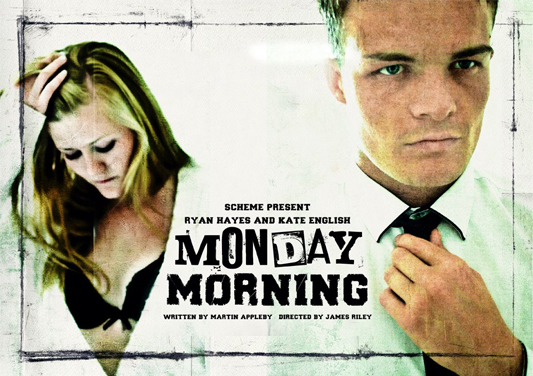 So, yeah, I write screenplays. This is the poster for a short film written by yours truly. We shot it back in August. Well, I say "we" but I really had little to do with the shoot itself. I was just there watching, whilst other, far more talented people, made my script come to life. It was a weird, but very nice feeling seeing my characters become real (as real as a fictional character can get anyway).

The story is a comedy/drama about a couple that wake up on a Monday morning and have a series of comical arguments before finally deciding to break up.

The film is currently being edited so I haven't yet seen how it looks. I am extremely nervous about seeing it. I really hope it is good. It needs to be heart warming, but also funny. There is one scene in particular which is a little toilet humour-ish and it could come across on screen as plain weird, but I really really hope it comes across as funny. I laugh whenever I read the scene in the script, but I wrote the fucker so it doesn't count.

(And yes, I laugh at my own jokes. Even in scripts.)

I wrote the script a year ago just after moving to Brighton. It is based on a story a guy told me at my first job here about how he and his girlfriend broke up. It was a great story, so being a writer, naturally I stole that shit and turned it into a script. I never expected the script to be filmed a year later. I never even bothered inventing different names for the characters. Josh and George are their names. I no longer know the real Josh (I only worked there for a month), but it is weird knowing that he is out there, and a film exists based on he and his ex-girlfriend and he has no fucking idea.

You know the pish at the end of films about "The characters in this picture are fictional, any resemblance to persons in real life is coincidental blah blah blah"... Yeah, we really can't put that at the end of this film.

The shoot itself was great fun. Film making is awesome. Although twelve people crammed into a one bedroom flat filled with cameras and lights was a little... uncomfortable, but totally worth it.

We had several problems in the run up to the shoot. Firstly our lead actress had to drop out, so we had to re-cast the role a week before the shoot. Then the company we were renting the flat from changed our booking the DAY BEFORE the shoot and put us somewhere else, so the scouting and planning we had done on the original location was wasted. It turned out okay though as the new flat was bigger and actually worked better for the film. Then on the first day of the shoot our set designer locked her keys in her car after she'd just loaded it up with all of the set dressing and props. Brilliant.

As you can imagine by this point I was pulling my hair out wondering what else was going to go wrong. Luckily nothing else did. Although the landlord did threaten to kick us out of the building if we made any noise. I think he thought we were there to have a party or something. Idiot. WE ARE SERIOUS FILM MAKERS, YOU DAMN FOOL!!! (We didn't quite phrase it like that, he was a big guy!)

Once the shoot got rolling everything ran pretty smoothly. The actors were fantastic and really nailed the characters, so hopefully, fingers crossed, the film will turn out as well as I hope it does. I will post up a link to it on here when it is finished. Well, I will if it is good, otherwise I will never mention it again.