TWO OF MY FAVOURITE THINGS

A couple of weeks ago I had the pleasure of attending an incredible once a year event - The 10th annual Poets vs MCs at Concorde2 in Brighton. Anyone that reads this blog regularly, or knows me in "real life", is probably aware that I am quite partial to a bit of hip hop music and also that I enjoy the shit out of poetry. So a Poets vs MCs event?!? Hell fucking yeah! The only thing that could possibly have made it any better from my point of view would have been something like Poets vs MCs vs Punks vs Wrestlers vs Jason Voorhees! Now THAT would blow my mind!

Anyway. Poets vs MCs. In Brighton. At Concorde2. With my good friend Jessica. It was A-MAZING! It was put on by two different local nights... Poetry group Hammer & Tongue who host on a monthly Poetry Slam at the Komedia on the first Thursday of every month. And SlipJam:B who are a group of MCs that host a monthly rap night at the Concorde2.

We missed the beginning of the show so I don't know the history of the event. I don't know who was in the lead going into the 10th year but the rappers were vocally confident due to the fact that the poets were stepping onto THEIR turf. THEIR yard. THEIR ends. THEIR... you get the idea. The place was fucking packed and it was brilliant seeing the mix of different people in the crowd. Obviously there was a certain percentage of the crowd there to support the poets and a certain percentage there to support the MCs, two crowds that wouldn't normally end up in the same audience all that often. Brighton is a pretty fucking eclectic place at the best of times and the audience at this show really encapsulated the town's all-accepting, come as you are, nobody cares how you dress or what you look like or what music you listen to, just be your fucking self attitude. It was beautiful to see, and made me wonder how I ever got so close to leaving this weird and wonderful place!

To quote Winston Zeddmore from the end of Ghostbusters: 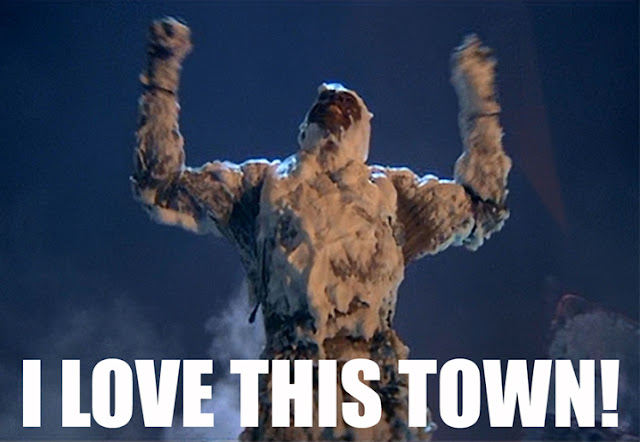 I digress. In the first round of Poets vs MCs the eight poets and eight MCs took it in turns to read a poem/rap a verse accapella. The topics varied and ranged from politics to car boot sales. In the second and final round ALL the poets and MCs converged in their groups on each side of the stage and again took it in turns to read a poem/rap a verse, but this time directing insults at the other's chosen art form. This was highly entertaining. The most popular poet by quite a distance was a dude called Spliff Richard. I had never heard of him before but apparently he is quite the local legend. When a couple of the rappers decided to "live up to the stereotype" and deliver battle rap verses aiming personal insults rather than general poetry-based insults, they nearly got boo'd off the stage! It was hilarious. I have never heard battle rappers boo'd so loudly before. It must have been really off-putting for the poor bastards considering battle rappers are normally cheered more the harsher their insults.

Check out Spliff Richard. His delivery is really quick so you may not catch everything, but give it a go...

At the end of the night the winners were decided by crowd cheering. I'd never been involved in a crowd cheering vote before and it kinda felt like I was an extra in 8 Mile. I thought the vote would be pretty close but the cheer for the poets was deafening. Unanimous victory for Hammer & Tongue!

I can't wait to check out the next Hammer & Tongue poetry slam and hit up some more SlipJam:B hip hop nights and I DEFINITELY can't wait for Poets Vs MCs 11 next year!
Posted by MARTIN at 9:30 pm