I came home from a distinctly average day at work on Monday to a letter from Luka. Totally made my freakin' day. I love getting post! It put me in an instant good mood, to the point where my housemates looked at me and were like "Why are you so happy? What's wrong with you?"... stuffice to say I'm not always the happiest of chaps on a Monday evening. Or any evening. Or ever, really. It takes something quite special to put me in such a delighful place and that reason, on this distinctly average until this point Monday, was contained inside a red envelope afixed with Spider-Man stickers. Luka not only wrote me a letter but she drew me this... 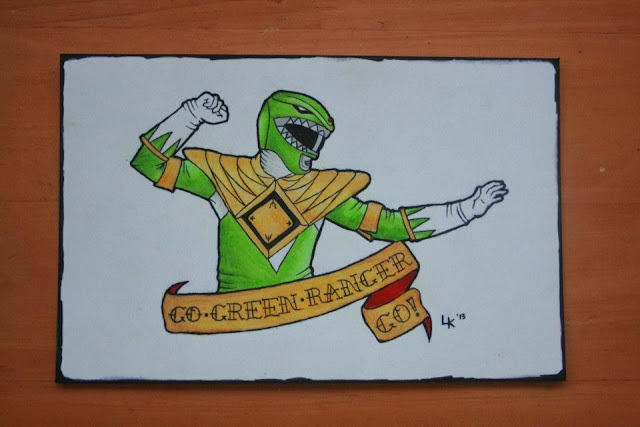 It's like that girl knows me, or something. When I first started this blog there was no real rhyme or reason for it, it just seemed like a fun idea. I kept writing, and I don't know why but people seemed to be interested in what I had to say. Even when that is just rambling nonsense. The internet is a labyrinth of weird and wonderful things, people and stuff and I feel honoured to have met so many fantastic people due to IN PURSUIT OF EXPRESSION.

I found Luka's blog by accident, through another blog that I followed. I liked the look of it and followed it, she then followed mine in return. It turns out that we're much the same, she and I... Nerds who like loud shouty music, with a penchant for cider and tea. It's probably a good thing that we don't live in the same country, because if we were both in the same room together at the same time, well, that would just be too much awesome for the world to cope with.

Anywho, I ended up getting very drunk on Monday night, not sleeping at all, and then having to sit through a day at work in borrowed clothes with a raging hangover. This is how the conversation with my manager went:

Manager: "Martin, you don't seem entirely with it today?"
Me: "Yeah, umm, I may be a little hungover."
Manager: "Well... At least you're honest."

I won't go into the full story of the night because it was freakin' insane! But in brief, the highlights consisted of me dancing to Off With Their Heads on the beach, Jägerbombs, dancing to shitty chart hip-hop like a bad man, hazelnut lattes, and drunk tennis at 7am. Just a regular Monday, yo.

After the abomination that was Tuesday at work, Wednesday was another day to be chalked up in the 'distinctly average' column. That is, until I got home to find a letter from Hanna. I first met Hanna over on 20somethingbloggers. For those of you unaware, 20sb is a social network for people in their 20s... who blog. It's a great little community brimming of a variety of fun and interesting people. Hanna is all different kinds of lovely. Super creative. Hilarious. And not to mention, a drop dead stunner!

So, in short, I have somehow gathered this little online community of friends (I haven't even mentioned the awesomeness that is Erin or Lauren or Cassie or the many others) and I now have a pen pal in Toronto and a pen pal in Los Angeles. When I was a kid I always really wanted a pen pal in another country and now I have two!

I will be composing my replies at the weekend. My alcohol/hangover free weekend. After two epic hangovers within the space of four days, I really need to recuperate and actually do something productive with this coming weekend. Also, my bank account HATES ME! Tonight I have a meeting with some producer buddies about making a short horror film to enter into a competition, so maybe I'll get my horror on and bash out a script. Or maybe I will once again be seduced by the dark side and find myself on another drunken misadventure...