I have never been to a music festival before. Back in the day all of my friends used to regularly go to Reading Festival but I would always balk at the cost of a ticket. These days all of my friends go to Download Festival every year. I have always wanted to go, but again, tend to balk at the idea of paying so much for a ticket. My argument was always that I would rather pay money to go to individual shows of bands that I really want to see, rather than paying a shed load of cash to see some bands that I want to see and a bunch that I don't care for. Still, I would really love to have that festival experience. At least once.

Back in April, on my birthday, I got wicked drunk with my best friend and she managed to convince Drunk Martin that he should by a ticket for Download. To be fair, it really didn't take much convincing. The conversation kinda went like this... Her: "You should come to Download with us!" Me: "Um, okay. Fuck yeah! Let's do it!" and I bought a ticket then and there. Drunk Martin is easily swayed.

I woke up the next day with a killer hangover, a hazy memory of said ticket purchase and £200 less in my bank account. Oh Drunk Martin, what do you do to me?!?

So next week my festival virginity is going to be ripped away from me in brutal fashion. 4 nights at one of the biggest, if not THE biggest metal festival in Europe. Before buying the ticket I didn't even check to see if there was any bands playing that I even wanted to see. It turns out that the line up is pretty freakin' sweet! 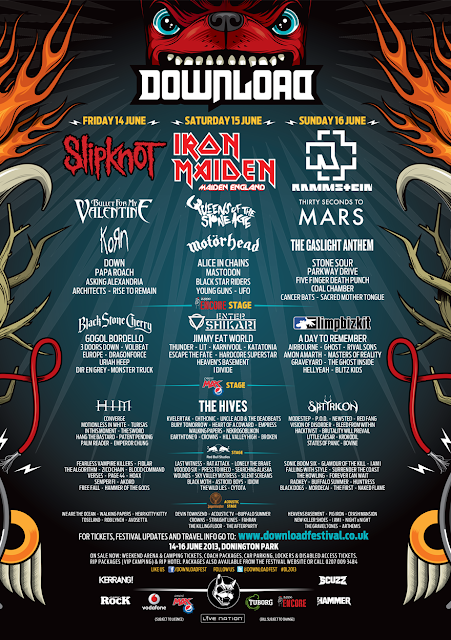 I am not the biggest metal fan in the world so a lot of the bands that are playing I have heard of but never actually listened to.

Saturday night is going to be epic! Alice In Chains followed by Motorhead followed by Queens of the Stone Age followed by IRON FUCKING MAIDEN... What a night! (Although I am bummed because Jimmy Eat World are playing at the same time as Queens of the Stone Age and as much as I would love to see Jimmy Eat World I will probably be too lazy to move having just seen Alice In Chains and Motorhead on the same stage, because I'd then have to get BACK there after Jimmy for Maiden and that sounds like a shit ton of effort and I'll probably be too wasted to know where the fuck I am anyways. Ho hum.)

On Sunday (If I am still alive) I am looking forward to The Gaslight Anthem and then motherfucking Rammstein. To be honest, I'm kinda gutted that Rammstein's set overlaps with Limp Bizkit's. I'd love to see Bizkit purely for ironic nostalgia value. KEEP ROLLIN' ROLLIN' ROLLIN' ROLLIN', WHUT? For equal nostalgia value I am also looking forward to seeing Papa Roach whom I have not heard fuck all from since Infest came out in 2000 (2000!). Althoughhhh Papa Roach are playing at the same time as Dragonforce. What ya gonna do?!?

Man, trying to plan what bands to see and when is a freakin' nightmare! No wonder I have avoided festivals for so long, this is giving me a headache.


I am also looking forward to seeing my buddy Jay's band, Subservience. They're playing a set on Thursday night. He is shitting himself nervous as this will be the biggest gig his band have ever played. I am really happy for him that he has got an opportunity on such a big stage and I know that he is going to fucking kill it!