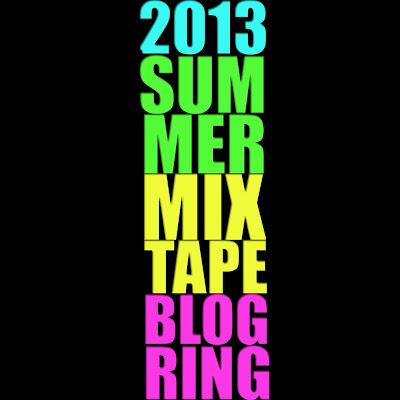 At the beginning of the summer a few of us internet blogging types who share a keen interest in the musical arts decided to form an alliance and start a summer music blog ring. The idea was a simple one: to compose a mixtape of songs that we have each been listening to over the summer months and then write a brief post of the who's and why's and the like. My playlist is over on Katie's rather lovely blog Struggling Single Twenty-Something and I get the pleasure of playing host to music connoisseur and all round awesome dude, Jorge Farah of Ever-ist and Every -ism. I am super happy that I got Jorge in the blog ring because I am a huge fan of his blog. Not only is the dude a legit music nerd but he is a freakin' wordsmith. But don't take my word for it, I'll let the man speak for himself...

Hey, it's not that I'm against Summer Playlists. I love syncopated handclaps, shimmery solar-glare production and crisp, inoffensive, upbeat pop songs about reckless abandon and escaping the harsh reality of our otherwise dreck existence. I love all of that. I would've gladly put together a collection of songs in that vein; it would've certainly been a cheerier endeavor. But residing in the southern hemisphere means that the months comprising June through September are pretty fucking cold (and yes, before you ask, our summers take place in December, and yes, it's the saddest thing in the world). So the songs that dominated my attention during that particular date range weren't necessarily victorious hymns of doe-eyed optimism or careless debauchery; they were just songs I listened to while I rode the train to work or stayed inside on a Saturday afternoon to avoid the cold outside. Some old. Some new. All of them pretty good.

I put these tracks together in the form of a continuous playlist-- as in a single mp3 file instead of individual tracks for each song. This is because I am way into the idea of crafting a listening experience-- where song transitions are as much part of the experience as the actual notes being played, as the listener traverses through a carefully designed sequence of moods and emotions. Because I'm a pretentious douchenozzle like that. So click the player below and get listenin'.

1- Chiendent- "Matières Familiales". A frenzied, demented serving of ever-so-deliciously-unnerving surf-rock from the greatest Quebecois band you've probably never heard of. I've had this album for a while but I go through periods of rediscovery-- there was a three-week-long period where I couldn't stop listening to this instrumental track. You can read more about this talented French Canadian group in my post here.

2- Pity Sex- "Wind Up". A Bandcamp discovery. I love this album, an energetic collection of fuzzy singalongs. This particular track may be the only song in this playlist that has any kind of "summery" sound to it, so soak in the sunny cheer for its two minutes of running time, because it gets kind of dour from here.

3- Laura Marling- "Master Hunter". This album has been getting a ridiculous (and completely deserving) amount of press and praise. You've heard it all: at first glance a dime-a-dozen Joni Mitchell facsimile, but upon careful listening revealing a lot of nuance, dynamics and freedom. This lady is a humongous talent, managing to sound at times feral, contemplative, sardonic yet always very real and upfront, without any bullshit posturing. This song is just a masterclass on doing a lot with very little, an acoustic blues romp that's recorded and mixed in a way that it sounds like the entire band is playing right behind your head.

4- Frightened Rabbit- "The Woodpile". Feels good when a talented indie band gets enough fame and recognition to earn themselves a major label deal, and proceeds to produce an album that takes advantage of the expanded resources and slick production values instead of delivering pure pandering dreck. For as much as the mastering in this album is an overbaked mess (you'd think it had been engineered by one of Rick Rubin's evil henchmen), the songs benefit from the richness in arrangements. This song, the lead single, is an absolutely solid radio rock song, with stops and starts and a soaring fist-pumping chorus that would make the late-90s alternative rock balladeers blush-- and it works completely.

5- Red Tail Ring- "The Heart's Swift Foot". An adorable folk album in the (minimalistic) string band tradition, this mournful number feels like one of the more sullen and ultimately rewarding tracks. The whole album is worth listening to, though, wonderful and fiddle-laden rainy-day music.

6- Tegan & Sara- "Shock to Your System". This year's "Heartthrob" was the album that saw the notoriously lovesick indie rock duo doff their acoustic guitars and trade them in for synths and dance hooks. The whole album is a solid listen, and a remarkable accomplishment in pure pop songcraft-- sugary melodies over heavily adorned, snappy pop music. But as much as I love the album for its pop exquisitiveness, "Shock to Your System" is my favorite track. It's kind of an outlier, being the only song that really approaches the kind of downbeat murkiness of albums like The Con, yet using the heavily compressed, synthy arrangements to full effect. The result is a heartbreaking and affecting kick in the gut. Like O, like H.

7- Big Business- "I Got it Online". I've been listening to a lot of Big Business lately-- I love how big and sludgy their guitars sound, and how fucking loud they are. This song is an angry rant about... who knows what, really, but listen to those fucking guitars dude!

8- Joyful Singers-. "Kort Appel". I have to thank my friend Aly for this one. A couple of months ago, she directed me to a collection titled "Open the Church Doors: A Collection of Norwegian Christian Psych, Folk and Jazz". I didn't know what to expect, but much to my surprise the collection is loaded with total awesomeness. A surprisingly groovy, funky, DANCEY collection of religious music that is a total thrill to listen to, even if I have no idea what they're singing. Something about Jesus, probably. I don't really care. Listen to this guitar solo. It's absurd. (For more adventures in sonic weirdness recommended by Aly, check out the podcast we recorded together a few weeks ago!)

9- Maria Pien- "Fantasia en G Para Un Pueblo al Sur del Mapa". Argentine singer-songwriter Maria Pien, like many residents of Buenos Aires, has a complicated relationship with her sprawling hometown, a beautiful city with a bit of an attitude problem. In an attempt to come to terms with her own feelings towards the city, she wrote and recorded this beautiful little tune. I really can't give the arrangement enough praise-- it's a thing of beauty in all its placid simplicity. A great song.

10- Sergio Mendoza y La Orkesta- "Mambo Mexicano". I found these guys in a SXSW sampler earlier this year. Man, this track is a kick in the face, but a good one. A kick in the face that leaves you charged up and energized. I love this music and the big band approach applied to a frenetic mambo, and the overwrought and tongue-in-cheek-overdramatic vocal performance on top of that. It's good fun.

11- Neil Halstead- "Digging Shelters". Neil Halstead is the former guitarist for Slowdive, a band that excelled at building emotional sonic spaces and exploring the palette of colors available within a sustained mood. His solo career is a lot more straightforward and folksy, but no less affecting. Palindrome Hunches is an album from 2012 that just entered my life this year, and my life is richer for it. A beautiful collection of understated open-chord fingerpicked lullabies. A good Sunday morning comedown album.

12- Bebe- "Razones". Pafuera Telarañas is an album that came out during my junior year of high school and I listened to tirelessly up until my first year of college. It's a pop album, it sounds a little dated (containing an inordinate amount of DJ scratches during the more upbeat tracks, by that point remnants of a bygone era) and the production is a little too slick and plasticky, but the songs are good. Even great. Blending pop with flamenco, ska, trip-hop and guitar rock, it still holds up. But the track that caught my attention this past season, by sheer will of my iPod's shuffle function, is "Razones", a beautiful (and beautifully-recorded) a capella lament. TOTALLY SUMMERY.

13- The Roots- "Make My". A great track off of Undun. I love the Roots. I love their ear for detail, for fine arrangements, for little melodic flourishes in a genre that's disproportionately rhythm based. Questlove is one of those musicians that takes genuine pleasure in sounds butting up against each other, in color and nuance, and that shows up all over their records. As a sidenote: their new collaboration with Elvis Costello, "Wise Up Ghost", is now streaming online and I can't recommend it enough. Goddamn, what an album.

jorgefarah.com
Posted by MARTIN at 10:56 pm

Email ThisBlogThis!Share to TwitterShare to FacebookShare to Pinterest
Labels: Music