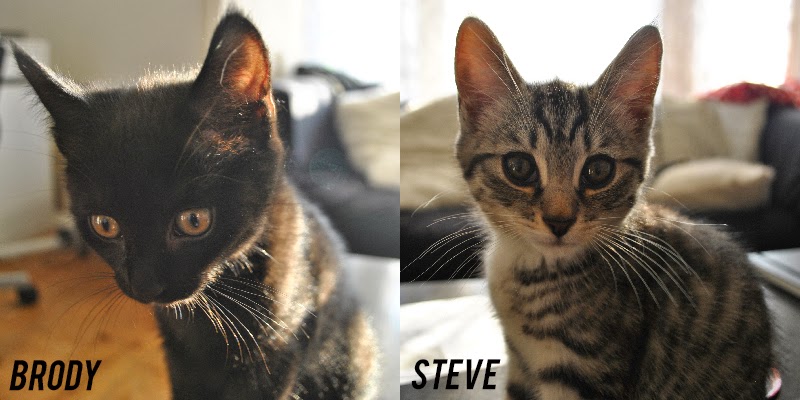 My girlfriend and I got kittens about two months ago. She named the boy. Steve. She likes giving her cats standard people names (Her last one was called Dave). I named the girl. Brody. Yes, after Brody Dalle. Yes, it is 2003. Yes, I am a sixteen year old girl. No, I don't give a fuck. Speaking of Brody Dalle. Funny story. A few days ago I was in a sweet shop buying some toffee crumble and the teenage girl serving me told me that the Distillers t-shirt that I was wearing was awesome. I'm not sure why but it felt creepy as fuck and somehow very very wrong. What's that about?!? Anyway, the kittens...

Jesus H Christ kittens are annoying as fuck! They ATTACK EVERYTHING and EVERYTHING IS EXCITING! "Is that a laptop charger?... MINE!" "Oh look, a foot sticking out of the bed! NOM!" "Look, something moving under the duvet... POUNCE!" "Oh look, a cupboard/wardrobe/cardboard box. What's inside?... I'LL CHECK" "You're doing the washing up?... I'LL HELP!" ...I could carry on, but you get the idea. It is so tiring. And no matter how many times I threaten to flush them down the toilet THEY WON'T LEARN TO BEHAVE.

Also, THEY EAT AND SHIT SO MUCH! I know they're growing and everything but I did not anticipate how much it would cost to own kittens. They eat more than I do and they're the size of my feet!

I love them really, though. I would never ACTUALLY flush a kitten down the toilet. When they're sleepy and docile they're incredibly cute. Like now, for example: As I type this post, sitting on my bed, with my laptop on my... lap, Brody is asleep on my legs. She is generally the more placid of the two, Steve is kind of a maniac. I'm not going to lie I'm kinda looking forward to when they're all grown up and spend most of their time chilling out and snoozing instead of getting all up in my shit.

Brody has now woken up and wandered off and Steve has decided to chew on my toes. Fuck my life.
Posted by MARTIN at 11:30 pm