I went to a gig last night and it was the strangest, most awesome gig that I have ever been to. I finished work at 8pm and after a brief pit-stop at home, headed straight to the venue. I had to be back at work at 8am today and part of me wanted to just crash out on the sofa but I went along regardless (Saturday shifts are a doss anyway, hence why I am writing a blog post right now as opposed to actually working). The gig was headlined by Louise Distras, a folk punk singer-songwriter from Wakefield. This was the first stop on her first UK tour with a full band. She is touring with American singer-songwriter Bryan McPherson and this show was supported by local Hastings punk band PUNKA.

I have been a fan of Louise for a long time. I discovered her music sometime in 2012 but last night was the first time I'd had the chance to see her live. She'd toured the UK a couple of times before since I'd been following her but she'd never played anywhere close to where I live. Suffice to say I was pretty fucking excited. 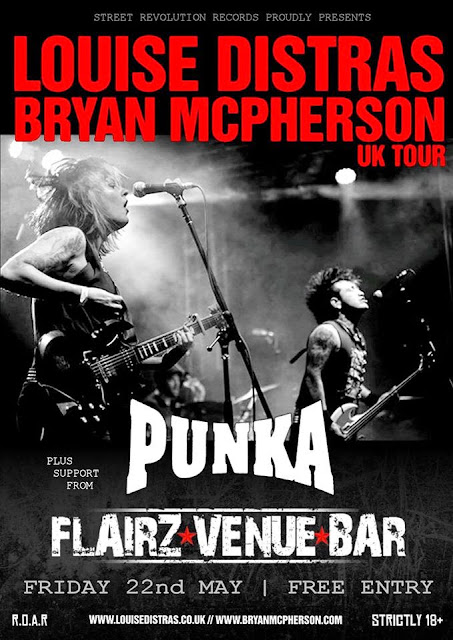 PUNKA played to a room of about five people. They trudged through their set and cracked a few jokes about the place being empty. I'd seen them before but this was the first time I'd seen them sober - they were decent enough, if a little uninspired. Next up was Bryan's set. Unfortunately only a few more people had arrived to see him. At this point PUNKA really pissed me off. They were dismantling and packing up their gear right in front of the stage as Bryan was playing. No fucking urgency whatsoever, just casually packing up and chatting amongst themselves. He took a couple of sarcastic digs at them which seemed to go over their heads. I really enjoyed his set, the highlight of which was the last song he played, 'Worker's Song'. Below is a video of him performing the song in Milan, Italy earlier this year when he supported The Dropkick Murphys.


Before Louise's set she came up to me and introduced herself. She'd seen that I had a backpatch on my hoodie of one of her old t-shirts and thanked me for coming. Unfortunately I was the only person who was actually there to see her, the other people that turned up would likely have been there no matter who was playing. She decided that due to there being fuck all people in attendance she would just do an acoustic set. As soon as she started playing PUNKA were once again being total dicks. They were stood at their merch stand at the back of the room, talking and laughing loudly. Louise was already pretty upset at basically playing to one dude and this really pissed her off. I could not believe the total lack of respect they showed to both Bryan and Louise. It was fucking embarrassing. And PUNKA are not teenagers, they're middle aged men. They're either really arrogant or completely ignorant, I couldn't tell. They even had the nerve to leave half way through Louise's set and brazenly take one of the gig posters from the wall right next to the stage as they did so. I will be in no rush to see them play again. Ever.

As for Louise's set, it was fucking awesome. She dedicated the whole thing to me and I got to request the songs I wanted her to play. I was ashamed of my shitty town for not turning out in force and completely embarrassed by PUNKA, but basically getting my own private gig from a musician that I admire greatly was pretty much the coolest thing ever. For Louise the gig was a right off and one that she will undoubtedly want to forget about in a hurry, but for me it was a gig that I will never forget. If Louise ever plays in your town, I implore you to go along and check her out. She's fucking rad!