This month's interview comes to you all the way from the U S of A, with a no nonsense, says it as he he sees it, whiskey drinking writer with a work ethic that will make you feel like the laziest son of a bitch on the planet. He has thus far published seven books and he isn't even thirty yet. Not only that but word on the street is that he will also be appearing in the upcoming seventh issue of PAPER AND INK!

First things first... What's your name, where do you come from and what do you do? 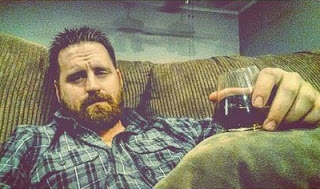 Name's Dave Matthes. The long and short of it is, I was born and currently live in South Jersey, and have lived most of my life there. I consider myself a writer, but for a paycheck I install bulk cooking oil systems in restaurants, casinos, airports, and supermarkets all around the United States, so there's a lot of travel in my line of work, which I love.

How long have you been writing?

I've been writing since grade school, but I self published my first novel around 2011.

Do you prefer writing prose or poetry or does that just depend on your mood at the time?

It really all depends on where I'm at. Right now I'm staying in a hotel in Rochester, NY for work. On these trips I usually write more poetry than prose.

You recently released Bar Nights, your seventh novel and the first in The Mire Man Trilogy. That's an impressive output for someone who isn't even thirty yet, what's your secret? 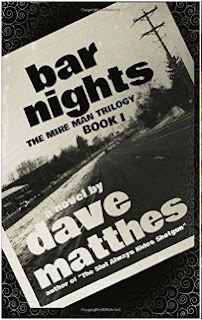 I can't remember who said it, but it'll always stick with me. They said something along the lines of, "what's the point in sitting down to write if you won't stand up to live?". So basically, I just live. And I live as hard as I possibly can. That and I always have a bottle of Jameson handy, because you never fuckin' know.

All your work is self published, have you ever approached any traditional mainstream publishers/literary agents with your stuff or are you happy to go it alone?

I have, but I don't like the way mainstream publishers handle business, not that any of my submissions have been accepted anyway. I prefer self publishing because I have all the control. I don't have to worry about some editor wanting me to change something because the reader might get offended.

I love the cover artwork on your books. Do you do all that yourself?

Yeah, that's another thing I like about self publishing. It can take a while and I usually go through about ten to twenty cover designs before deciding on one, but it's one of my favorite things to do. If I'm wrestling with the blank page and losing, sometimes I'll just work on a new cover design, and that usually enables me to shit out a few sentences in whatever I'm working on.

What was the last book you read that blew your mind?

This is hard because I really don't read, hardly at all. I'd have to say The Road. They was it was written was unlike anything I ever read, and by the end I probably ordered five pizzas just for myself, just so I had someplace to put my overflowing emotions.

That is interesting, that you hardly read. Why is that? Is it lack of time, lack of stuff you're interested in reading, or just time you'd rather spend writing?


It's a combination of things I guess. Partly because there is a huge lack of anything worth reading out there, at least the newer stuff, which is mostly just a bunch of crap people cookie cut from other people's writing. And also because I work 60 to 70 hours a week most of the time. Finding time to write is more important to me than finding time to read.

Who would have won in a fight... Hemingway or Bukowski?

This is a trick question, obviously. Bukowski never would have even stepped into the ring; he'd be too drunk on apathy. And Hemingway, he's too boring to even swing a fist in the right direction; he'd end up stubbing his toe on a predicate and think it was a soliloquy or some shit, then forget he wanted to fight Bukowski to begin with.

My friends from high school, no question. We've all gone our separate ways, save my best friend who I consider my brother, and who I also live with. Nothing could even come close to beating the nights we used to have together. I know you said three people, but there aren't three million people on the planet I'd rather spend another night with.

An admirable answer. How about if you could get drunk with one fictional character, who would it be?


One fictional character... well, I'm not at all a Harry Potter fan... but getting out of this world, batshit drunk with Hagrid would probably end up being a damn good time.

What is your drink of choice?

Jameson for prose. Wine for poetry. And beer for warming up.

I know that you love your music, but if you had the chance to see one band, play one show, in any time period, who would it be and when?


Led Zeppelin, no question. Right smack dab in the middle of their fuckin' prime.

What is your favourite movie?

I don't have just one, so I'll say Shawshank Redemption, Jaws, and Crash are up there on the list.

If some Hollywood big shot wanted to turn Bar Nights into a movie who would be your number one choice to play Arlo Smith?

When is part two of The Mire Man Trilogy coming out and what can we expect?

I'm hopefully going to be finishing the first draft sometime in November. It's basically an origin story for Arlo, mostly taking place during his high school years. I don't want to get into details, but it's far darker and grittier than Bar Nights.

I am looking forward to part two with bated breath. Thanks for taking the time to answer these questions.

Follow Dave on Facebook, Twitter and Instagram. Read my review of BAR NIGHTS and buy his books on Amazon. He will also be in PAPER AND INK ISSUE #7 which is out in January.
Posted by MARTIN at 7:24 pm