This interview is one that I have been wanting to do for a while. I had the great pleasure of meeting this fantastic writer towards the end of last year and he is an absolutely wonderful human being, true Salt of the Earth. His debut novel, Billy and the Devil, has received unanimous praise from all who have read it and his second novel, The Gospel According to Johnny Bender, is due out later this year...

Dean Lilleyman. Born in Sheffield, grew up in Chesterfield, moved to a farm near a wood, now live in a village near the Derbyshire/Nottinghamshire border. I write novels. 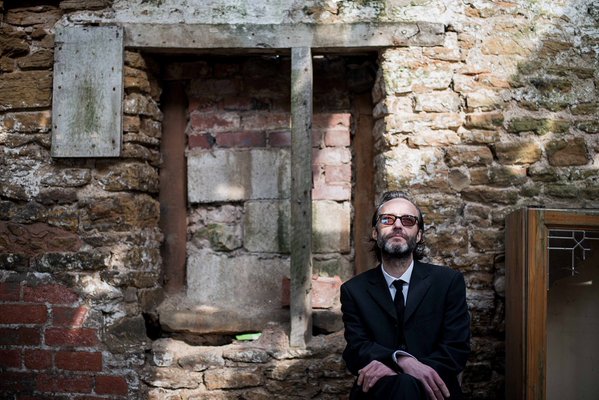 For the few people reading this interview who have not yet read your debut novel Billy and the Devil, tell them a little about it...

Well, it’s the story of Billy, who we watch from kid to thirties. Downwards he goes as the drink takes hold. It’s a splitter. Some people get it. Some people don’t like it. It doesn’t hold back on the messy stuff. But, it’s tender too I think. Like I say, a splitter.

With the story being partially autobiographical, and Billy being such an unsavoury character, do you ever worry that people will automatically assume that Billy and Dean are one and the same? 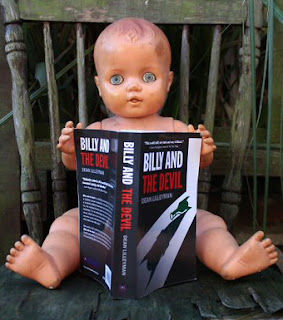 I used to be quite uncomfortable about that idea, when I first started putting Billy together. Luckily, a mix of my own bloody-mindedness and having a circle of good people around me saying yes, do it, saw me write it as I intended. Now I see it like this: if you read it and think everything real, then I’ve done my job. Some things happened, some things might have happened. Some things got bent to suit the story. Some things were heard, seen, borrowed. And, of course, what if? When I first started sending it out to literary agents, I got one rejection back saying they thought it ‘too real’. Funny.

There has always been a kind of romanticised relationship between writing and booze. Many famous writers were noted alcoholics and for good or ill that is often celebrated. However I believe writing is actually one of the things that helped you off the booze, is that correct?

For sure. It felt like I was taking the bad stuff out, stuff I didn’t quite understand, jam-jarring it up, sticking it on a shelf. I think writing, reading, picking stories apart, filled the hole where the drink had been. I worked like a madman. Still do. And yes, that ‘romanticised relationship’ you mention. I think it’s just that. And, you know, sure there’s been some very important art made under the influence, but there’s the other side to it too. Hemingway shot himself in the head. Fitzgerald and Kerouac died too young and fucked up sick. Anne Sexton took herself into a garage and gassed herself with a running car. And on it goes, a massive list of sad nasty ends. I was watching a Bowie documentary the other night, and he said how important it was when he realised the strength of his writing when he wasn’t fucked up. And that’s the point. I think it’s a mistake to believe the stereotype. It’s you that makes what you make, not the drug. Trust yourself.

Billy and the Devil was published last year by Urbane Publications, who seem to be red hot at the moment, how did you hook up with them?

Matthew Smith, who runs Urbane, contacted me and said he’d bumped into my website. On the back of that he’d read a copy of the self-published version of Billy, and would I like to meet up for a chat. To be honest, I was quite hesitant at first. After a few let-downs I’d got into a place where I was determined to do everything myself. But, after a couple of phone natters with Matthew, I went to meet him in London. I got good vibes off him pretty quick. His buzz with Billy was very real. As were his ideas of publishing. No aloof boss nonsense. He uses what he knows, his experience and savvy, the writer chucks their end in, mix it up in a bucket, go. I tend to have an Achilles twitch with business people, in that everything usually feels forky-tongued, don’t trust it. I didn’t feel that with Matthew. He seemed no different to me, in that the making comes first. I was chatting with Sophie and Jim at Hand Job Zine the other day, about getting off your arse and doing it yourself. Their angle was ‘the more of these things that happen the more of a happening there becomes’. I think that’s the truth, right there. It’s too easy to have one crack at something, not quite get what you wanted, quit. William Burroughs once used the phrase ‘enlightened interdependence’. I like that idea. Join these things together with Hubert Selby Jr’s epiphany of one short turn around the wheel so make, work hard, make, and that’s where I’m at. I think there’s an essence of all these things with how Urbane works. Absolutely the indie publisher to watch.

I know you are a big fan of Raymond Carver and he was a big influence on you, what other writers are favourites of yours?


Roald Dahl’s short stories were a recent wow for me. Very dark and spicy. Unpredictable. Sharp. Clever. And I love how Lars von Trier puts his demons into a story-world, vulnerable and exposed. Proper genius, misunderstood. Henry Miller too. Said things the way he wanted to say them. Nearly had to have my jaw wired after stumbling into his Tropics books a couple of years ago. Beautiful fuck-riddled poetry in prose. And definitely Sylvia Plath. What a heartbreaker. Said the unsayable, put her black dog onto the page in a way that brings it right into the room. Sexy, defiant, broken, absolutely brilliant. Dylan Thomas for sure. The music he made. The way he put words against each other. The pacing of his lines. Under Milk Wood an absolute favourite, big influence. It boggles to think where he would’ve gone from there. Another maker for that list of sad nasty ends. I have other favourites too. Lots. I tend to get compass from all sorts of making, I think. Tracey Emin’s sassy. Anton Newcombe’s drive. Diane Arbus’s eye for beautiful ugly. I’m very fond of makers that go their own way, stay true to it, whichever way it bends.

Picture the scene: Some hotshot TV exec calls you up and says that they want to adapt Billy into a three part mini series, what do you say?

Yes. But Lars von Trier directs, and Charlotte Gainsbourg is Billy’s wife. I get to be Billy, of course. 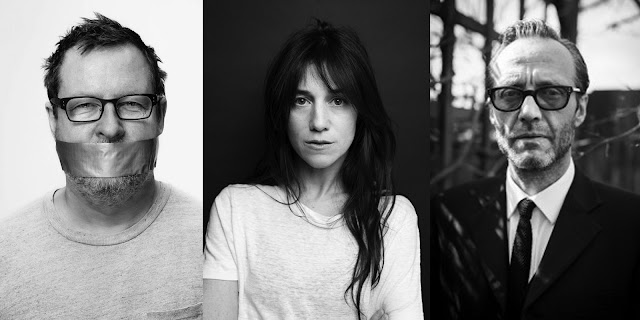 I caught you perform a snippet from Billy at the Hand Job Zine launch last year. You were phenomenal and had the crowd eating out of the palm of your hand. Most writers don't have that kind of stage presence, was it something that came naturally to you or a case of practise makes perfect?

Ta Martin. Well, I started reading out several years ago at uni, and because I was so nervous I think my fight or flight kicked in, and it all came out my mouth quite brassy. Luckily it seemed to suit Billy. Then a little later, I did some gigs with my mates Sam and Steve, them playing guitars while I strutted about doing Billy. We haven’t done Billy the musical for quite a while now, but I still carry a blob of mojo from it in my back-pocket when I perform. Practise, yes, but perhaps not too much, just enough to be able to relax into it and get a buzz off the gig.

Speaking of Hand Job Zine, you have appeared in a number of their issues, along with my zine PAPER AND INK, the mighty PUSH and others. Why do you think these self published lo-fi fanzines are so popular at the moment?

Your second novel, The Gospel According to Johnny Bender, comes out later this year, again from Urbane Publications, what can you tell us about it?

I can tell you I’m really happy with it. It all takes place in the span of one day. A village carnival in 1979, and 1999. Johnny Bender, the village outsider, narrates, takes us around the place, introduces us to the characters, tells us some riddled truths like a modern day Shakespearean fool. There’s a love story or two, a murder-mystery, a ghost story, some fuckery, all with a Hitchcock thriller taste, I think. Think Kafka doing Under Milk Wood, ish. It’s different to Billy, but there’s definitely a dialogue between the two. 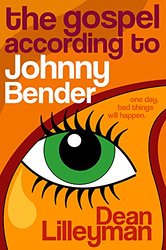 I have always been drawn to stories that take place within the space of twenty four hours, so that premise really excites me. I think crafting a compelling story arc and well rounded characters within that time restriction takes a great deal of skill. Was that challenge something you thought about or did the premise develop naturally?

It was definitely something I thought about, but it also developed itself. I write in my loft, and the whole thing began as mad scribbles on my ceiling. It felt an easy way to collect ideas. I didn’t always know why I scribbled what I did, what relevance it had, but I scribbled it anyway. Before long the entire ceiling was a scrapbook of madness. Possible character ideas, songs, happenings, quotes, images, a place, instincts, things. The idea of time came from seventies disco lyrics. There seemed to be a theme. Yesterday’s gone, tomorrow’s not here, only now now now so let’s do it. When I sat back and looked at the whole it started to make weird sense. Then I spent a while translating it all onto paper, giving it a loose shape. One day, one place, everyone trapped within. Then I painted over the ceiling, rewrote what I wanted to carry forward, and started adding more stuff. The idea of time felt very important, the end of things. So I began reading stuff about that. The Book of Revelation, Nostradamus, the idea of history repeating, of what if ends were beginnings, on and on? And this, believe it or not, is where the disco came back into it. One record ends, another begins. “It’s the same old song, but with a different meaning since you been gone.” So, two days, twenty years apart, made into one day, same characters, happenings echoing off each other to make one story. I painted over the ceiling again. Rewrote it as chapter bones, left space for accidents, wrote the novel off it, called it The Gospel According to Johnny Bender, because it is.

Now that you have two novels under your belt and an ever expanding fanbase, what's next for Mr Lilleyman?

A third novel. I’m on it now. Very buzzed about it. And after that, another. Don’t stop.

Thanks for answering these questions Dean, and best of luck with the new novel.

Keep up to date with all things Dean Lilleyman on his website or on Twitter, read excerpts from Billy and the Devil in both issues #6 and #7 of PAPER AND INK, and buy the novel itself directly from Urabne Publications.
Posted by MARTIN at 9:52 am