LIT FIEND INTERVIEW #17 is with writer, poet, blogger, avid tea drinker and the guest editor of the twelth issue of PAPER AND INK LITERARY ZINE #12... 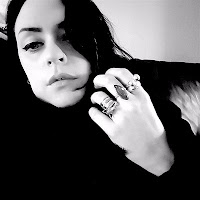 My name is Katie Doherty, I was born in Wales and now I live in England. I am a writer, a poet, a collector and a publisher of morbid and literary tomes.

How long have you been writing poetry?

Since I knew what poetry was, I think this may have been in primary school. I was writing short stories and poetry when my friends were out playing; my internal world was so magical. I haven’t stopped writing them since.

What I like about your poetry is that it is very direct, but at the same time very emotive, and wears its heart on its sleeve. What / who are your biggest poetic influences?

I don’t think I can necessarily track where my voice came from, it has just naturally evolved into what you read today. I grew up on the poetry of Dylan Thomas, I fell in love with the words of Emily Bronte, Anais Nin, Shirley Jackson, Bram Stoker, M.R James, Anne Rice, Anne Sexton, Nick Cave, Charles Bukowski and many more. Growing up as an only child enabled me to live in my own world, rather uninfluenced. I was always intrigued by psychology, death, religion and art and luckily I had very open-minded parents, so much so that my Mother and I often took long walks through the local graveyard to gather our thoughts.

Your anthology, Your Black Opium, has just been released. Tell me a little about it... 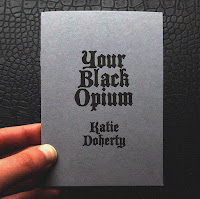 Your Black Opium is made up of fragments and lost objects. Ghosts and predictions. Love and loss. It was written over a long period and wasn’t actually written as a set piece but somehow it all came together. I cannot say my work has a theme but if there was a genre I would file my work under hauntings.

You also publish zines and magazines yourself, how long have you been doing that?

I started publishing my own zines back in 2007 and then I opened up my own little distro a couple of years later - I brought this around with me as I moved from place to place. As a child, I always dreamt of being the editor of a magazine and I don’t know where that came from. Alongside my distro I would create zines but then I published an online magazine and after a few years of that I vowed never to do that again so went back to print in the form of Obscurum. Paper is wonderful and it should be printed on with deliciously morbid things.

As an editor, I always feel like it is cheating when I put my own work in to an issue, is that just me or do all editors who also write feel that way?

I did put my own work in the last issue of Obscurum and I don’t feel guilty about that. It isn’t a vanity issue, I just had a piece I felt would fit in with the theme of death. I can see why people may feel like you are pushing your own work on others but you know, sometimes it’s nice to see the work of an editor, gives them a sense of being at one with the contributors rather than the big bad editor!

You are guest editor of the next issue of my literary zine PAPER AND INK, which is a women only issue, due to the always unequal ratio of female to male submissions that I get. Why do you think it is that less women submit their work to publications than men do?

Without working for The New Yorker or a publication like that, I’m not sure I could comment on the ratio of male to female submissions they receive. Of course women do submit and probably get ignored but thankfully there are many women-only publications about. This is brilliant that a space has been built but for us but we shouldn’t have to build a space because work should be accepted on merit and not what gender you are. With regards to Paper and Ink, if this zine was run by a woman, would this help get more submissions? Maybe. I am hoping that being the guest editor will help this.

What do you look for from submissions? What kind of writing impresses you the most, and what kind of thing annoys you?

People who try too hard. People who attempt to be like someone else. People that write rubbish to shock. These are things that annoy me. I love a real voice and I love to feel something. I won’t look at your name or if you have been published; I will just read your work and if I get that feeling, you’re in. It is a simple as that. You may write the most wonderfully technical poem that I will applaud you for but if it lacks soul then I won’t like it.

What was the last book you read that blew you away?

I buy so many new books and none of them touch me, I end up going back to the old faithfuls but The Miniaturist by Jessie Burton blew me away. It had lots of good press and sometimes I think that’s a bad sign but gave it a go. It was so compelling, so wonderfully crafted and it was consistent until the end. I even wrote a piece about Jessie on my blog and she sent me a wonderful message on Twitter to thank me.

If you were stuck on a desert island, which three books would you want with you?

As an avid reader this feels like a cruel question. This will of course change from one week to the next but for now…

Henry and June by Anais Nin, Dark Tales by Shirley Jackson and a collection of poetry by Dylan Thomas. Is it cheating to have compilations?

There are so many people I would love to get drunk with but at the moment I would have to say Nick Cave, Dylan Thomas and Salvador Dali. I think choosing the muse, a Welsh poet and a surrealist would make for an excellent pub crawl.

Lastly, what does the future hold for Katie Doherty?

More tea drinking, writing in journals, reading and buying more books than I will ever manage to read in my lifetime. I will keep on writing, running my blog and publishing tomes of the macabre kind. 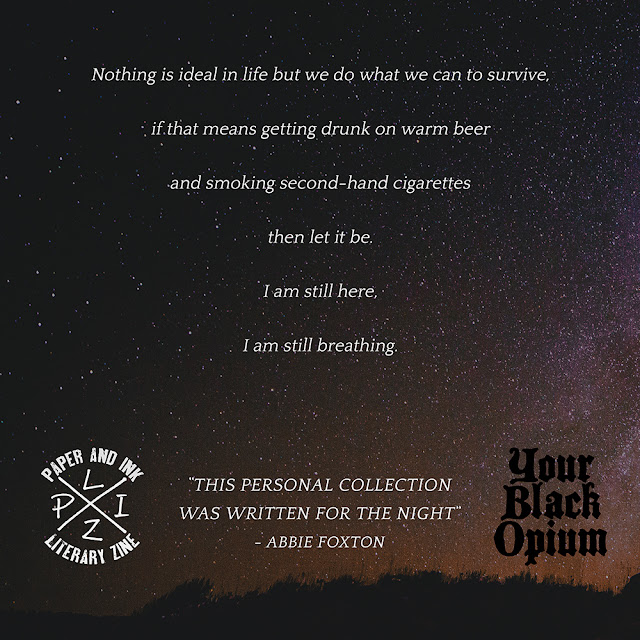 http://paperandinkzine.co.uk
Posted by MARTIN at 12:00 pm