It’s Friday and I’m in the big lecture theatre which they’ve called the Mansfield for some reason. There are students all around me and I’m zoning in on one two rows in front who I’ve seen in a few of my classes. She’s really pretty and she’s got a good sense of style, not like a lot of the girls you get here who wear any old current shit from the high street. She’s got an amazing figure too; slim with a big bum and pert little boobs, which all just comes together perfectly.
The lecturer is this fifty-odd-year-old hippy woman with long red hair, who’s pacing the stage and passionately telling us about some theorist she obviously can’t get enough of.
‘We enter the world through language and we discover language once we’ve discovered ourselves – we become a being, an individual…’
The girl strokes her hair and I imagine how it might feel gliding through my fingers. I’m also thinking about the girl I cheated on Liz with the other week in the Junction, back home in Cambridge. My phone vibrates and I take it out and have a look.

LIZ: Can’t wait to see you next week babe, maybe we can Skype later? ;-) Xxxx

I put the phone back in my pocket and start to sketch Fit Girl, beginning with that long hair and working my way down.
‘…The child with its fragmented sense of self crawls over to the mirror, sees its reflection and experiences a brand new feeling, a wholeness…’
I think the Junction girl’s name was Eleanor, although I’m not 100%. Me, Ian and Billy were towards the back of the club, jutting along to the wave of music that the DJ had pulsing from his speakers. Ian's coke hadn't lasted very long and I was feeling hammered from all the beer I'd been necking to compensate. The music seemed to get louder and with it a desperate urge to be close to someone built up in me, so I broke away from the boys and moved through the crowd.
I found a skinny blonde girl with another girl and stood next to her for a while, dancing awkwardly until she realised that I was there for more than the view. Eventually I turned and said something, I don't know what, and neither did she because she shouted ‘HUH?!’ and smiled – and then I laughed and she laughed too and I took her hand and twirled her around like a ballerina and she laughed even more, and before we knew it we were aggressively necking each other in the corner of the club, pressed up against each other like two moths humping on a kitchen wall.
Her mate came over and told her she was getting a taxi home, so I went with them and on the way back we carried on necking as her mate gabbed to these other two lads, and I realised that they all had frightfully posh accents, including Eleanor, who came up for air every now and then to laugh and say 'yar, yar'.
We got out of the taxi (which I paid for) and went into her accommodation, which was this small, Hogwarts-esque building. We went up a few flights of stairs and I remember saying something along the lines of ‘this is a really beautiful place’, and then none of them saying anything back.
She took me into her room whilst they went off into the kitchen. We started up again and I tried to put my hand down her pants but she pulled it away, grinned and said, ‘not yet darling’, in that really posh accent, and I suddenly became aware that she wasn't as fit as I thought she was, but I didn't care so I tried again and she said the same thing and laughed, more like scoffed actually, then ushered me through to the kitchen while I tried to reshuffle my hard-on.
We all sat on these chesterfields listening to some old folk music as they carried on grunting and talking about how fantastic the night was and how hilarious it was how someone did something to someone else.
Eleanor took her hand off my leg, which was bouncing quite rapidly at that point, and I realised she was losing interest. One of the lads said something to me and I quickly responded with something completely nonsensical, which I thought was really funny, but they all fell silent. Eleanor looked awkwardly to the floor and I felt frustrated at the exclusion, so I said something really quite horrible to her and she got very irate and started sobbing, whilst I nervously laughed and slugged my beer. Their circle of gazes felt quite severe so I said something else and then one of them jumped up like a big peacock showing his plumes. I pounced and gave him a hard thud in the chest as the others shouted, and then I tripped back into the centre of the room, spit bursting from my mouth and my whole body vibrating. I grabbed an iron from the side and started swinging it around until they backed off, and then I dropped it and ran.
I do a few more squiggles and smudges before stopping to take a look at the finished piece. It's got nothing on her, but still, it's pretty good. The lecturer says something that everyone laughs at and then we're all up, packing up our bags and leaving the theatre.
Outside, I see Fit Girl and some others chatting to a lad I know from my halls – Andy, or is it Mike? I’m half tempted to go over and suggest going for a drink at the student union, but instead I leave and spend a few hours walking around Nottingham until I get tired and go back to my halls for a nap.

In the evening, me and Liz have a long chat and it’s pretty nice, I guess. We talk a lot about how much we love each other and how we can make it work, and how it's great that we're at different unis because we’ll get to experience both cities. At one point we start crying and then semi-argue again about her going out dressed like a slutty devil to some party, and then we calm down and we’re back to the lovey-dovey stuff and then we say bye.
I see Andy/Mike on the way back from the kebab shop and he asks if I want to go out with him and some others to something called Havoc, so I agree and he gives me a T-shirt which has a to-do list on it with things like ‘kiss a girl’, ‘kiss a boy’, ‘do a shot’, ‘pull a moony’, etc.

I’m wearing the T-shirt and sitting on the kitchen counter as I crack open another beer and pour it down. There’s a sort-of-party going on but no one really seems to be talking, as in dialoguing and getting to know each other; it’s all very much focused on the drinking game they're playing and the rules you need to follow to ensure you get the most fun out of it.
Andy/Mike comes over to talk.
‘Sam, buddy! You up for joining in?’ he says, a big wide grin on his face.
‘Oh nah, I'm alright mate.’
‘Don’t be scared of the ring of fire, pal, I’ll make sure you don’t get burnt!’
I can’t think of anything to say to this so I just smile back and raise my beer and we do a cheers with his plastic cup. He carries on grinning and bobbing his head to some Jessie J song when I lean in close and ask, ‘who was that girl you were with earlier’?


'Quarter Life: A Few Weekends' by TJ Corless is a collection of all the chapters of his novel Quarter Life that have been published previously in various underground zines and literary magazines. 'First Weekend' was first published in the Hand Job Zine anthology. Click HERE to purchase the zine with exclusive Quarter Life beer mat. 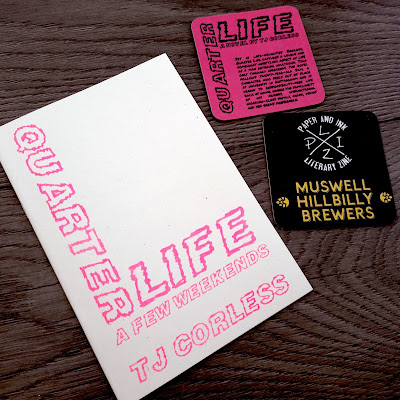